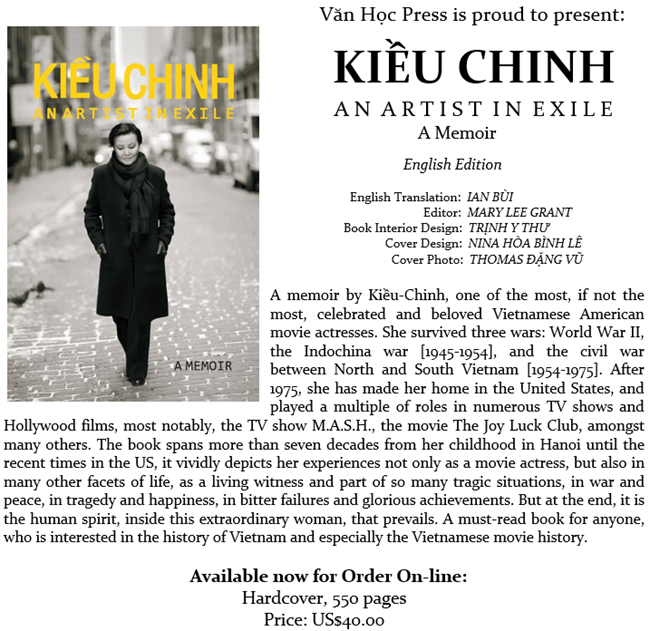 Barnes & Noble (US only)

Keyword for both sites: Kieu Chinh an artist in exile or Kieu Chinh Memoir

Kieu Chinh is an unusual woman who has lived what seems like five different lives. She survives as a poignant witness, an experiencer of the turbulence of our most controversial time… I salute her as a true and noble friend.

Chinh is indeed one of the bravest, strongest and gentlest women I have ever met in my life.

She’s so talented, there must be a place for her in Hollywood, somewhere.

Even as Ms Kieu Chinh acts in Vietnam’s dramas, she harbors within herself a story just as dramatic, certainly as gripping, as any likely to appear on the screen.

Calling Kieu Chinh a well-known actress is to speak of only half of her achievements. She personifies the idealized concept of strong Vietnamese women who face head-on the social concerns and problems of their times.

Raised in the same household, one brother and two sisters were split apart into three different directions by the ravages of war. This is a story about and by Kim-Ma Estate’s third child, Kieu Chinh: celebrated actress and Goodwill Ambassador whose art and enigmatic beauty embody the hopes and hurt of a people longing for freedom and peace.

Kiều Chinh An Artist in Exile is an inspiring tale of one woman’s passion, determination, and will to survive and thrive in the most challenging of circumstances. It is a pleasure to enter the incredible world of Kiều Chinh, a woman of talent, elegance and refinement who persevered and succeeded against the greatest of odds.

One is left with the horrible feeling now that war settles nothing; that to win a war is as disastrous as to lose one!

The practice of violence, like all action, changes the world, but the most probable change is to a more violent world.

The calamity of war, wherever, whenever and upon whomever it descends, is a tragedy for the whole of humanity.

The first casualty in every war is truth.